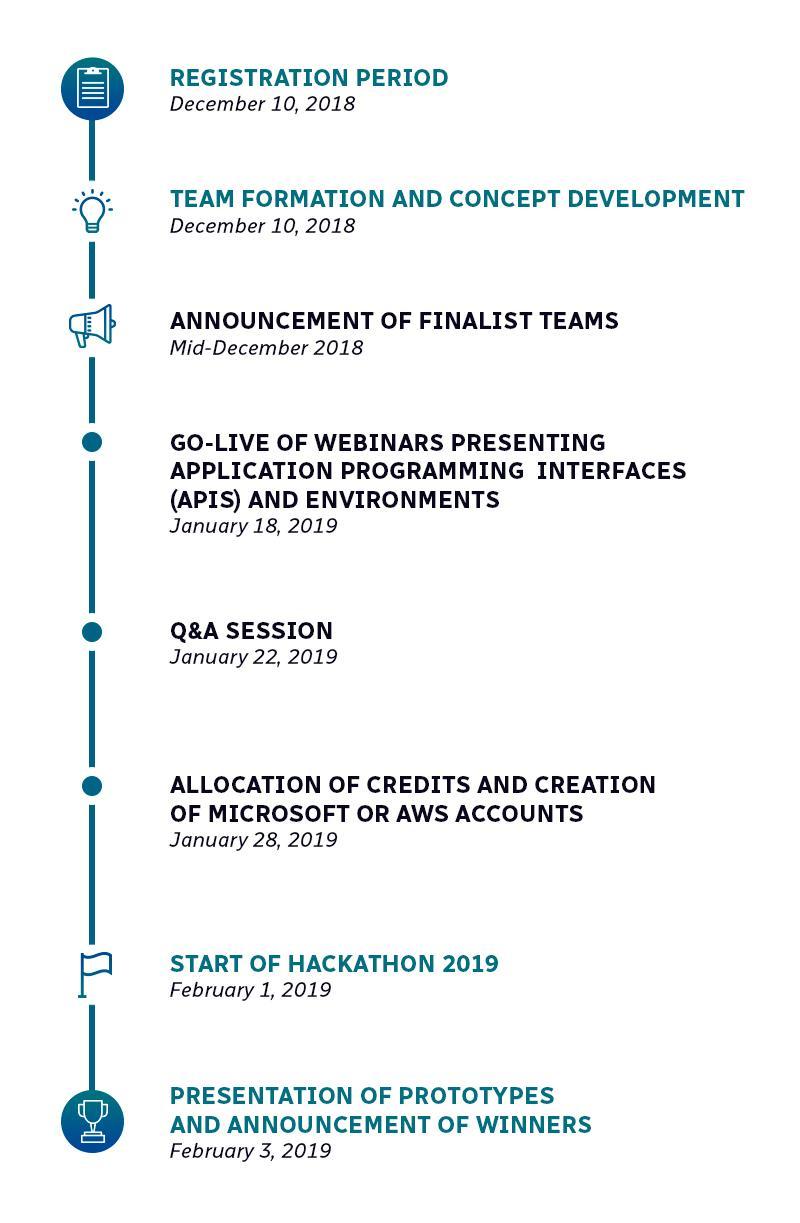 The programming marathon organized by CBC/Radio-Canada (Hackathon 2019) will take place from February 1 to 3, 2019. Participants may take part virtually, on-site at the Corporation’s premises in Montreal (1400 René-Lévesque Blvd. East) or Toronto (250 Front St. West), or, if possible, at a CBC/Radio-Canada regional station located near their home.

To take part, you must be aged 18 or older and a Canadian resident. You can register if you are a designer, developer or strategist or if you contribute to your digital team’s success in any way, whether as a student or professional.

A maximum of sixteen (16) teams, divided equally between Montreal and Toronto, each consisting of three (3) to five (5) people, will be selected and constituted according to the following profiles:

Should at least one project from a team composed of only residents of Northern Canada (Yukon, Northern Territories, Nunavut, Nord-du-Québec), the team who proposes the project with the most potential as determined by the selection committee will be offered a travel bursary to participate in person at the event in Toronto on February 1, 2 and 3.

Northern participants will be responsible for all additional expenses incurred in connection with their participation in Hackathon 2019, including meals, except for those expenses otherwise paid for by CBC/Radio-Canada as indicated on the Hackathon 2019 site.

To start, create a team or join one. Teams must be composed of 3 to 5 people, including at least two people from the following roles: developer, UI/UX designer. Teams will be asked to present their projects with a 5 to 10 slide presentation using the template provided in the team space. You may also create or use your own template if you prefer. Other documents (schemas, videos, studies, etc) that help illustrate your idea can also be included.

Each team must upload their project documents in their team space before December 10, 2018 by 09:00 am EST.

Selected participants will be invited to attend an important Hackathon 2019 virtual preparatory workshop in January 2019. The exact date will be announced later. Participation in these workshops is strongly recommended, but not mandatory. Information will be provided on the work environment, APIs and in-house services. Once every participant has viewed the webinars, a Microsoft or Amazon Web Services account will be set up according to the participant’s preference.

Participants will have access to the read trip data for CBC and Radio-Canada content. These data are the following:


The data provided will be associated with a specific pre-defined and continuous period of time. For confidentiality reasons, details concerning the period will not be disclosed.

Each team will also be able to use other open data and public services.

A team of experts will be available throughout the event to assist and guide participants and to answer their questions about the APIs and services, Azure or Amazon Web Services environment, accessibility requirements, and design.

A team of resources with prior hackathon experience will also be on hand to assist teams and monitor prototype development. Every team will be assigned a mentor.

7. Services provided to participants at CBC or Radio-Canada

Promotional items will be provided to participants present at CBC and Radio-Canada.

Teams will be formed on the Hackathon 2019 web platform between October 11 and December 10, 2018. Teams composed of students or professionals will be required to submit their project ideas by December 10, 2018, using the template available on the Hackathon 2019 digital platform. Projects will be selected by the CBC/Radio-Canada organizing committee by mid-December, based on their adherence to the theme, requirements, and rules.

Non-selected teams with the best results will be placed on a waiting list and may be invited to take part in Hackathon 2019 in the event that another team withdraws.

The final selection will be announced no later than mid-December, on the Hackathon 2019 web platform. Selected participants will be personally contacted by the organizing committee.

The organizing committee reserves the right to reject any request for registration that is incomplete or fails to meet the criteria set out in the rules.

Participants are not required to be physically present at the Hackathon 2019 site throughout the event. Those who wish to be present must inform the event organizers of their intention by January 11, 2019.

No replacements will be permitted once the teams have been selected. Withdrawals are possible, provided the requirements are met (minimum of three (3) people and at least two (2) developers). In the event the requirements are not met, the team will have to withdraw from the competition and the next team on the waiting list will be invited to take its place. Once Hackathon 2019 is underway (as of 5 p.m. on Friday, February 1), no teams will be replaced.

Every piece of code, design or other element used to create the project must be created exclusively during Hackathon 2019, between February 1 and 3, 2019, and must respect third-party intellectual property.

Each participant may be asked to give interviews.

Each team and/or participant remains the owner of their prototype and/or any other element they have developed during the Hackathon 2019. However, each team/participant grants to CBC/Radio-Canada a non-exclusive license, in perpetuity, throughout the world, to use the prototype and/or any other element created during their participation in the Hackathon 2019 in any manner whatsoever, including the right to adapt, develop, modify or publish the same.

Each participant undertakes to respect all third-party intellectual property rights, including copyrights, patents, official marks, and trademarks, during prototype development.

The evaluation criteria are as follows:

Final selection of participants will be carried out by the Hackathon 2019 organizing committee by mid-December, based on the following criteria:

Note for CBC/Radio-Canada employees: Any amount over $ 500 is taxable.

At the end of the period allocated to participants for prototype creation, each team will be required to make an approximately three-(3)-minute presentation, in English or French, either virtually or before a jury. The presentation must include a functional demonstration of the prototype. Final presentations will be made on-site or by video conference for virtual participants.


The prototypes submitted must meet the following requirements:


If there is a tie for a given category, the team with the best score for project originality will be awarded the award.